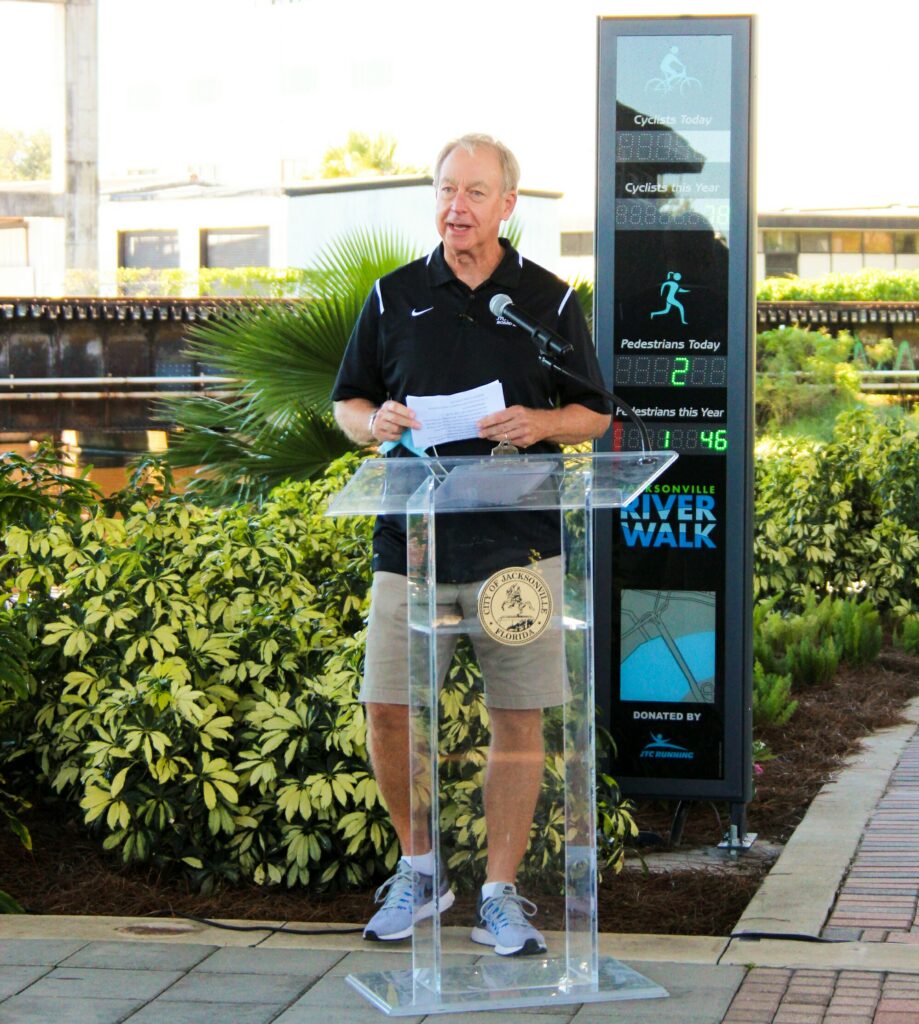 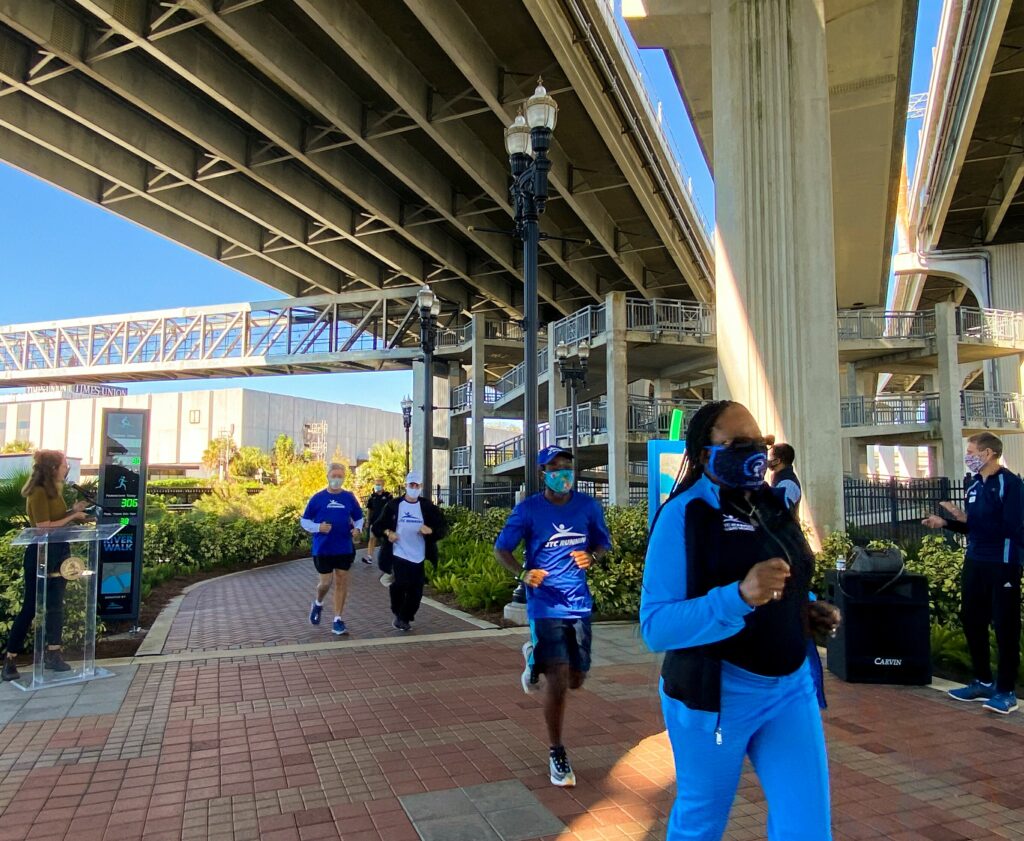 We could not have asked for better weather for the dedication of Jacksonville’s first Eco-counter on November 17.  More than 30 people including JTC members, representatives from Downtown Vision, the City of Jacksonville (COJ),  Downtown Investment Authority (DIA) and media were on hand for the dedication of the pedestrian/bicycle tracker at Corkscrew Park along the Northbank Riverwalk under the Acosta Bridge.

The Eco-counter was made possible by a $31,550 donation from JTC Running, working in partnership with various COJ departments and agencies. The sleek 7.5-foot Eco-counter kiosk with its LED display, tracks daily and year-to-date pedestrian and bicycle use. As of the event day, nearly 14,000 pedestrians and runners, and 2,500 cyclists have traversed the Corkscrew, on their journey along the Riverwalk to and from Riverside since it was installed in late October.

According to Lori Boyer, CEO of Downtown Investment Authority, “The Eco-counter is a great tool for collecting valuable data that can help guide active infrastructure investments Downtown while also promoting and inspiring the community to take advantage of our 2.8 miles (and growing!) of Riverwalk promenade.” Daryl Joseph, COJ Director of Parks, Recreation and Community Services says that having reliable data showing foot traffic is valuable as the City and its partners seek outside grants to improve facilities.

Additional trackers are planned for the urban core and information collected will help in future recreational and transit planning. The city has bought six temporary counters that are more simple, without the display board, that will collect data to compare usage before and after bicycle-pedestrian improvement projects, said Karissa Moffett, the City’s bicycle-pedestrian coordinator.

Moffett said work along Hogan Street downtown will be one the first areas the counters will be used, followed by spots the city has picked to create narrowing road diets or complete streets designed to be used safely by pedestrians, cyclists, cars and transit. The goal is to ensure investments are moving the City toward its goal of increasing walking and bicycling trips by 10% by 2030. “Thank you to JTC for spearheading the first permanent counter in Jacksonville—this is the first of many to help us reach our goal of becoming a bicycle and pedestrian friendly community,” said Moffett.

Where to Run In Jacksonville?

Find the best runs in Jacksonville with maps, descriptions, directions, and more. 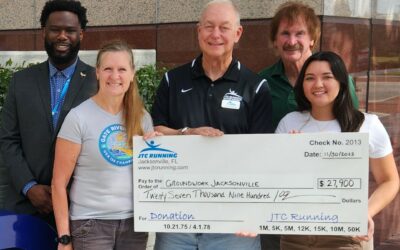 JTC Running paid all expenses for the VyStar Emerald Trail Race October 22 so that all entry fees, donations, and sponsorship money could go to Groundwork Jacksonville for the Emerald Trail. At the $27,900 check presentation recently were from left, Kemal Gasper of...

END_OF_DOCUMENT_TOKEN_TO_BE_REPLACED 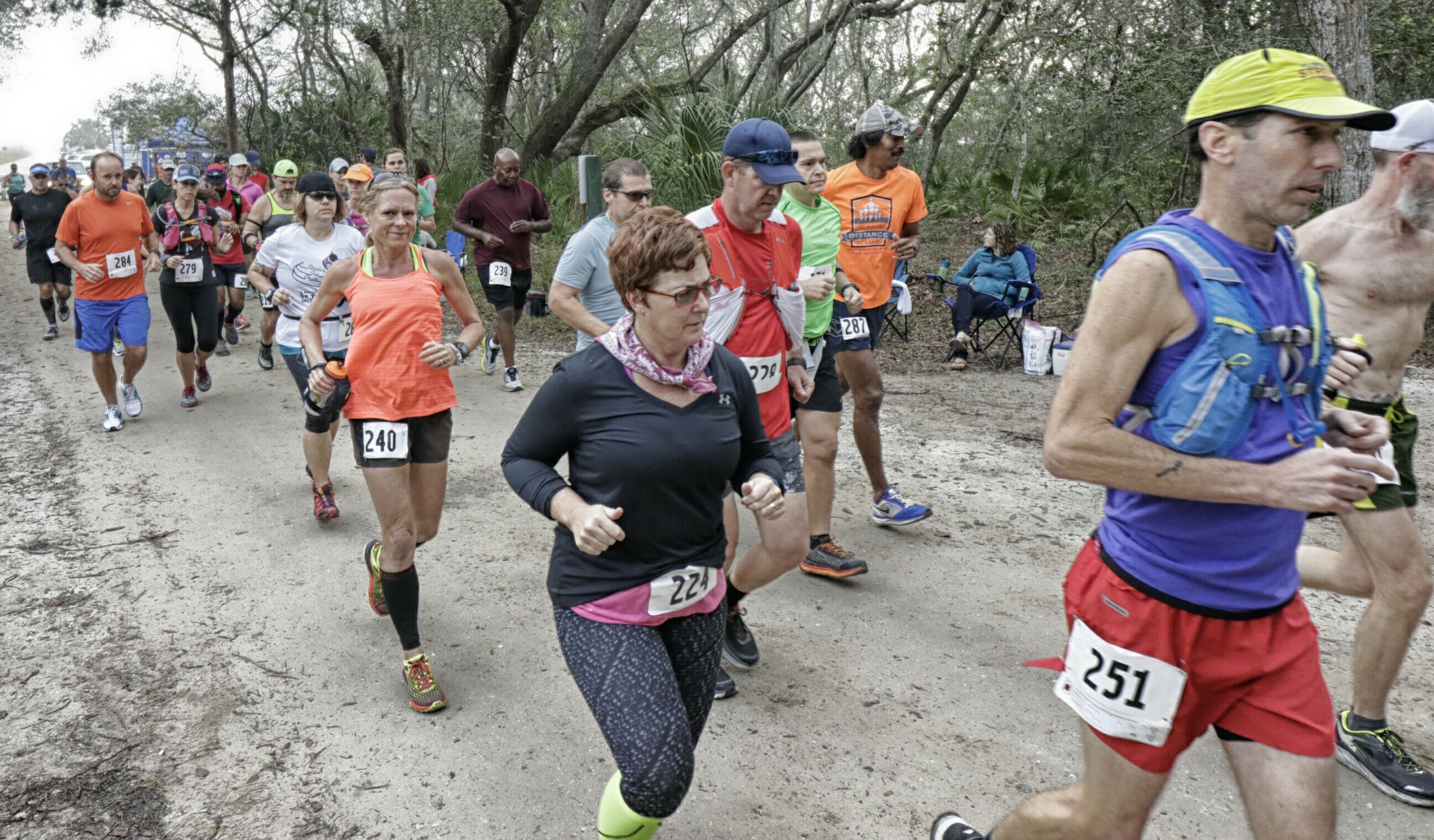 END_OF_DOCUMENT_TOKEN_TO_BE_REPLACED

CLICK HERE TO READ THE NEWEST EDITION OF OUR STARTING LINE NEWSLETTER!